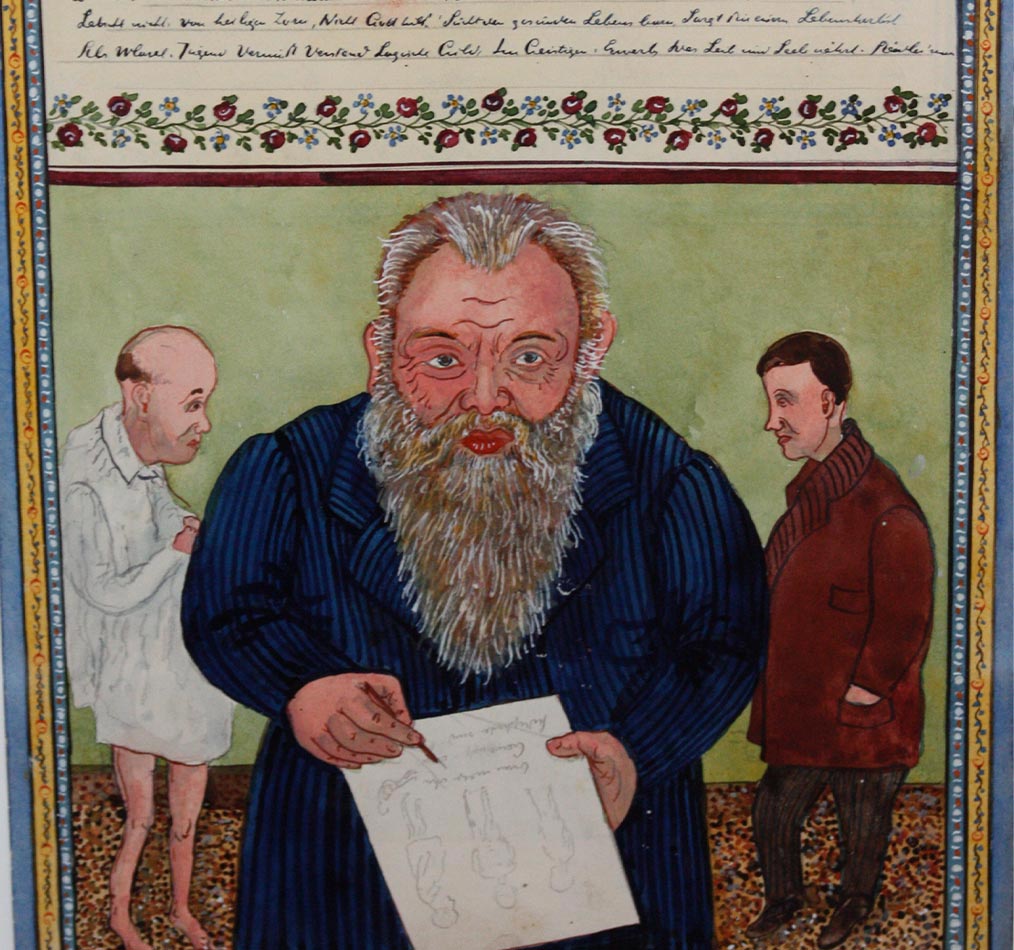 Rädler was born in Bohemia and, at the age of 23, came to Vienna where he established a porcelain workshop. Here he led an apparently conventional life, married and had four children. However, when he was in his late 40s, Rädler began to experience profound mood swings that prompted him, in his manic phases, to launch fantastic business schemes. He racked up huge expenses and became entangled in fruitless lawsuits. In 1893 his family, feeling they could no longer deal with him, had him committed to the Viennese asylum at Pilgerhain. Rädler was subsequently diagnosed as suffering from “secondary dementia” (roughly akin to what we today call schizophrenia), but it has more recently been suggested that his symptoms could have been the result of temporal lobe disturbances caused by latent epilepsy.

Although his prior profession had predisposed him to image-making, it seems Rädler did not start painting until 1897. His watercolors are all meticulously worked over on both sides of the sheet. One side usually centers on a relatively realistic image, while the other is covered with intricately nested skeins of symbolic figures and words that frequently taper off into illegible scribbles. In 1905, Rädler was transferred to a new state-of-the-art sanatorium at Mauer-Öhling. Among the institution’s special features were its large, park-like grounds, which even included an amusement area where inmates could meet for folk festivals, dancing, bowling and the like. After his transfer to Mauer-Öhling, the range of Rädler’s subject matter increased markedly. Whereas formerly he had painted mainly birds, he now did portraits of patients, scenes depicting them at their various activities, and renderings of the landscape surrounding the hospital. 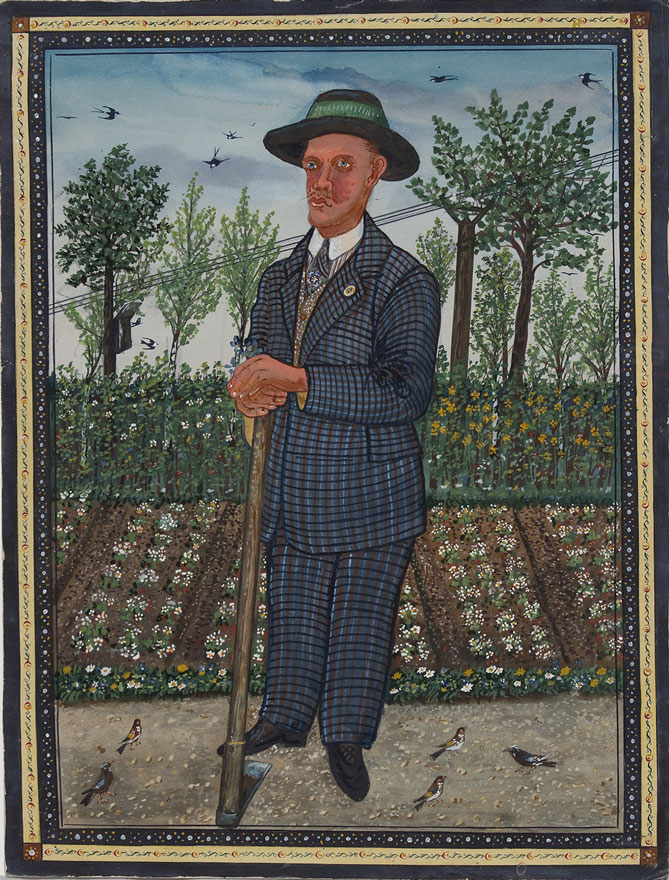 Man Standing in Front of Flowerbed with Garden Too (verso)l, ca. 1912 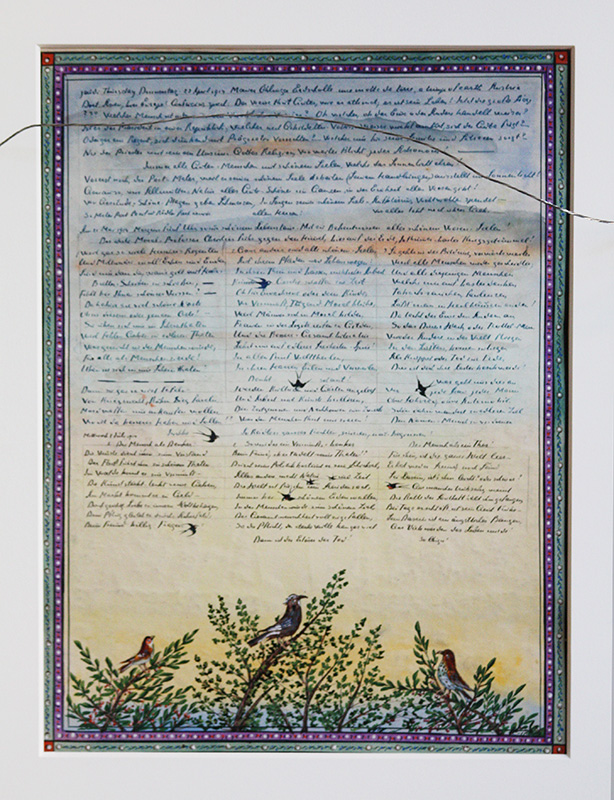 Man Standing in Front of Flowerbed with Garden Too (recto), ca. 1912 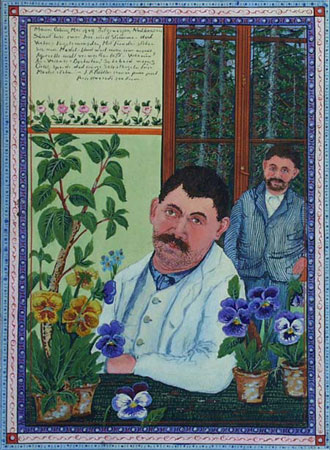 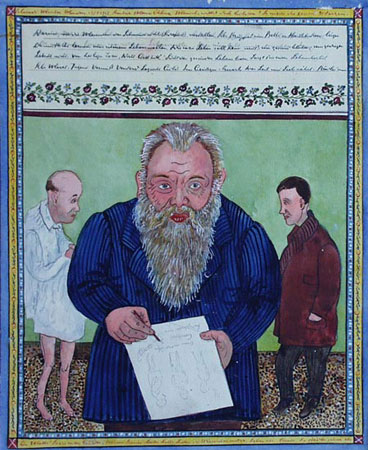 Man, Do You Want to Educate Yourself? Think Up a New Slogan Every Morning (self-portrait), 1917 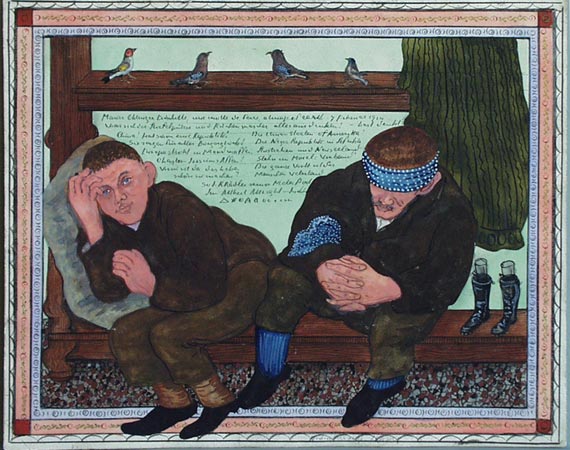 What the Bootblack and Dishwasher Think of All This, 1914 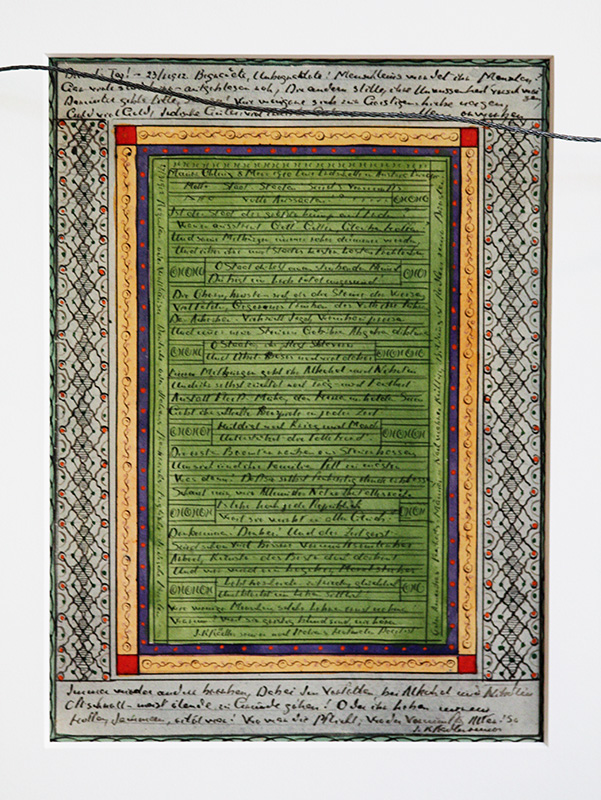 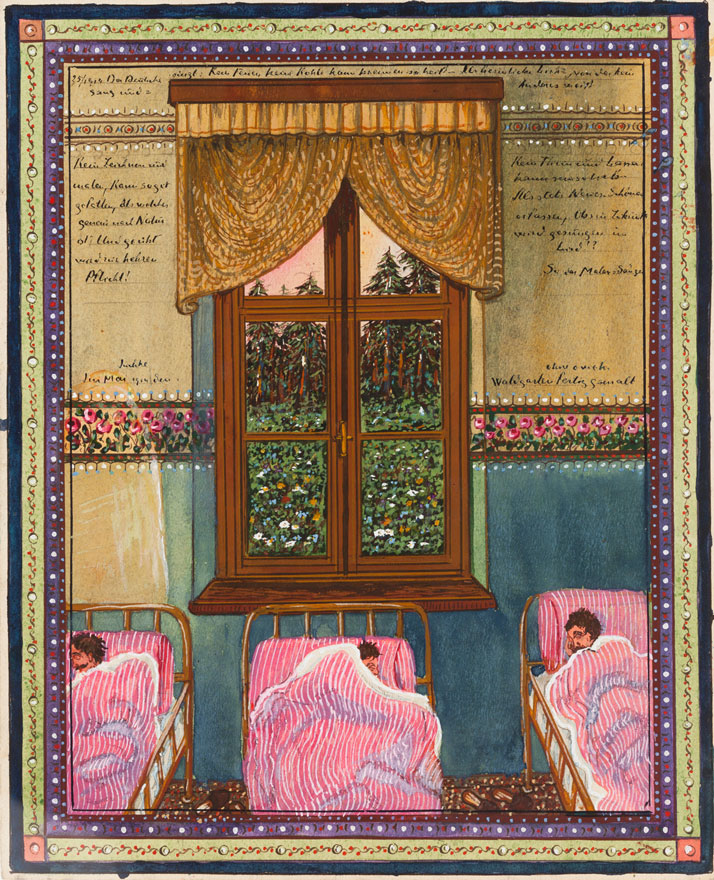 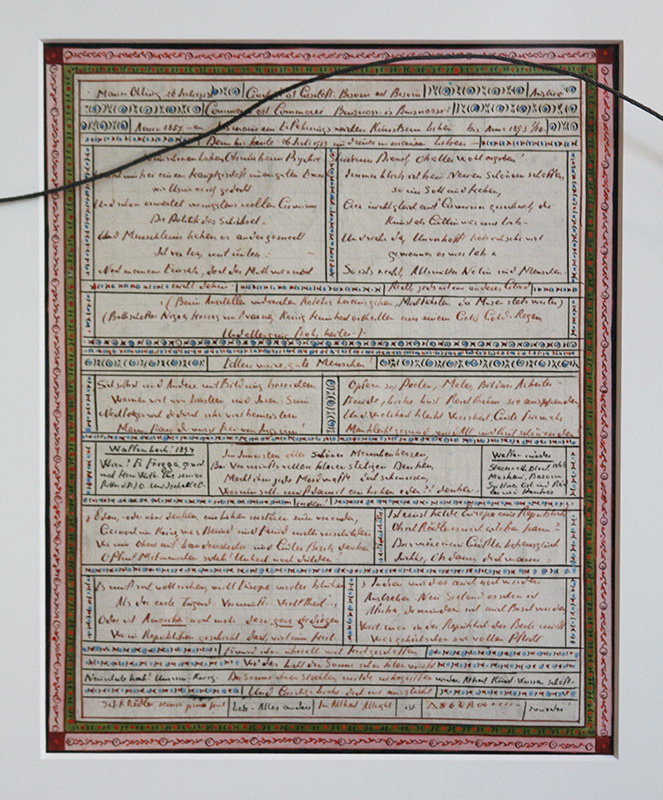 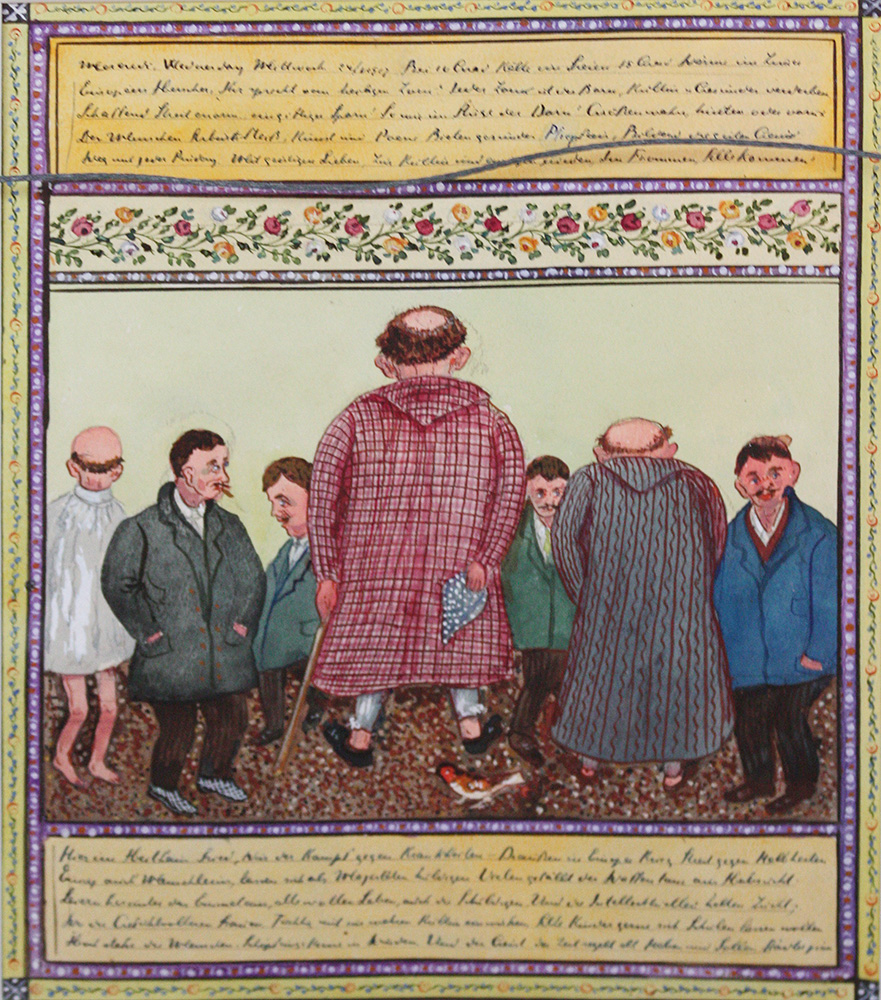 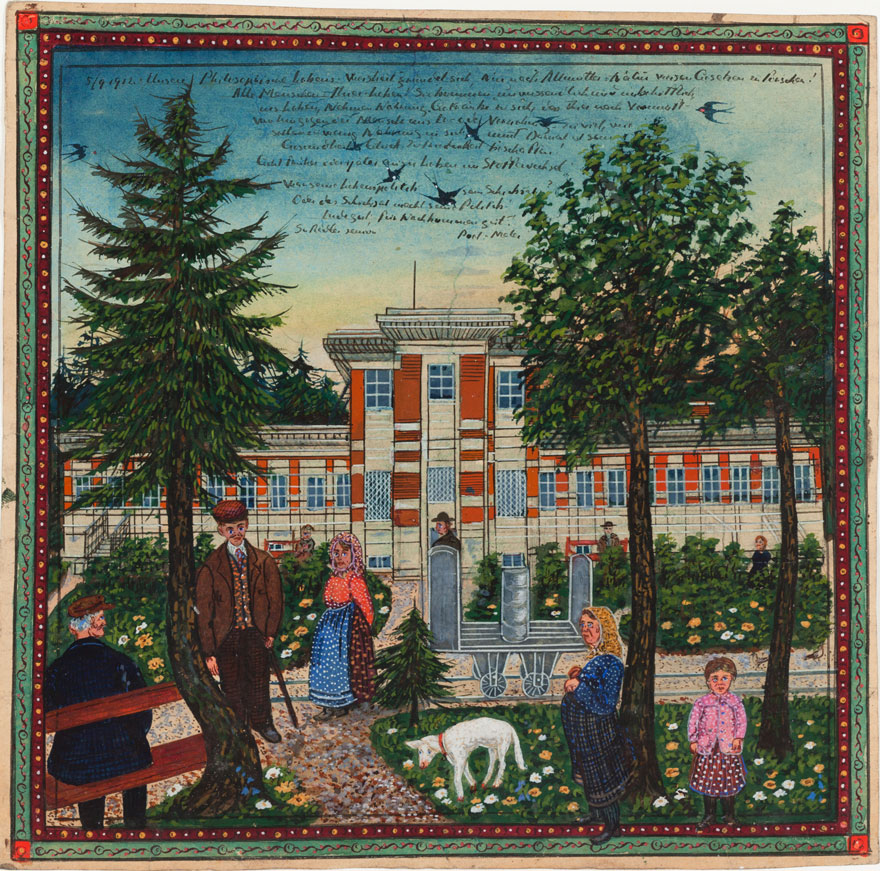 Water color and gouache on paper 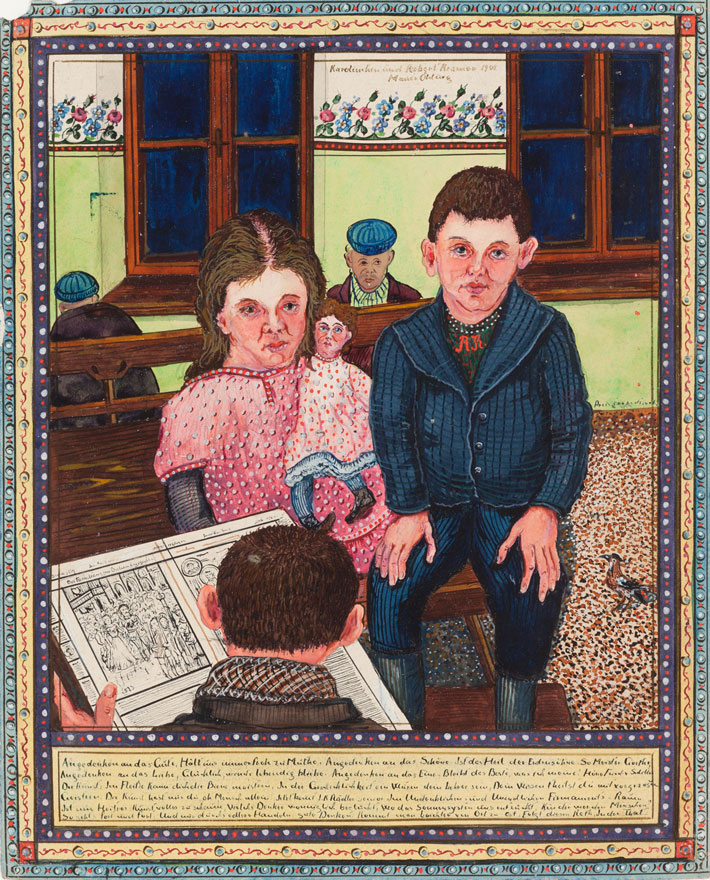 Rädler spent most of his time painting and writing, consuming copious quantities of paper and paint. This activity, it appears, was permitted if not encouraged because it kept the artist from causing trouble. Not much loved by his keepers, Rädler could be nasty and belligerent, and when not writing often harangued his fellow inmates with long philosophical discourses. Frequently signing his watercolors “The Laughing Philosopher,” he believed himself to be both a great thinker and a great artist. Many of his pieces are marked with exorbitant prices, though he was ready to sell for considerably less, provided the buyer signed a promissory note for the balance. The doctors, it perhaps goes without saying, did not think much of Rädler’s art. Hospital records describe his pictures as “mannered, wooden, spiritless.” Rädler’s artistic ambitions were seen as further evidence of delusional megalomania. From our present-day perspective, however, one may well wonder whether Rädler was branded a madman at least in part because he overstepped the boundaries of his prescribed social station. Had Rädler come from a more privileged background, he might have been welcomed into the then nascent avant-garde or at least been shielded from confinement in a mental hospital.

Although one of Rädler’s sons apparently became an artist, his family showed no interest in his work. His surviving watercolors–numbering roughly 400 items–were discovered in the 1960s on the trash heap at Mauer-Öhling by the husband of one of the nurses. In 1972, this nurse brought the collection to Leo Navratil, the Austrian psychiatrist famous for having established the artists’ group at the Gugging Mental Hospital. Navratil acquired about 100 of the watercolors, which he subsequently donated to the Niederösterreichisches Landesmuseum, where they were exhibited in 1994. The remainder of the drawings were preserved by one of the doctors at Mauer-Öhling, whose estate is now selling them.