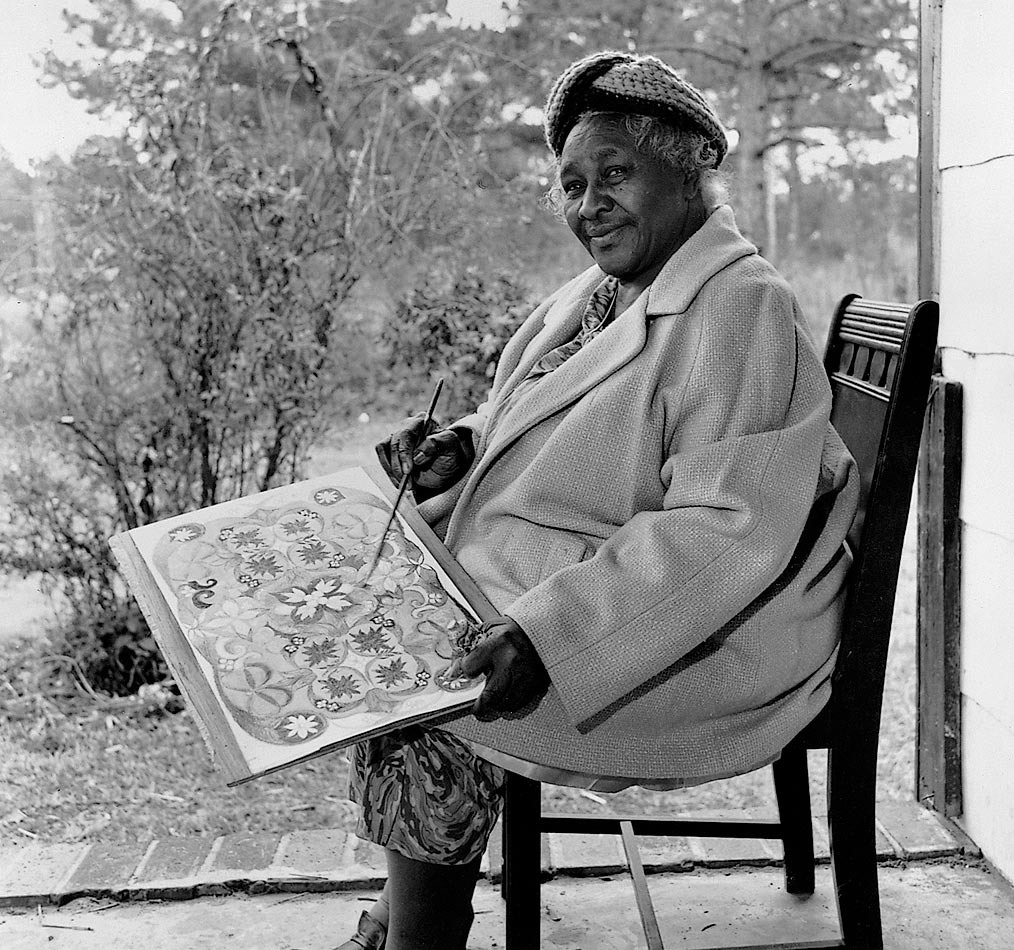 “I have never remembered sleeping without [dreaming].”

The words of Minnie Evans from her 1998 exhibition at Luise Ross Gallery, New York

Minnie Eva Jones was born on December 12, 1892 in a cabin in Long Creek, North Carolina. Her young, poor mother was fourteen years old, working as a domestic servant. At the age of only two months, Minnie was taken to live with her grandmother in Wilmington. She was essentially raised by her grandmother, and considered her biological mother to be more of a sister-figure. Her father, George Moore, was also very young when she was born and abandoned the small family. When she was a teenager, Minnie found out about his death, but not until a year after the fact.

Minnie’s family history is full of strong women. Passed down verbally from one generation to the next, their story recounts the experiences of their ancestor, Moni, an African woman who was a slave in Trinidad. She eventually ended up in Wilmington, North Carolina, where relatives still live today. 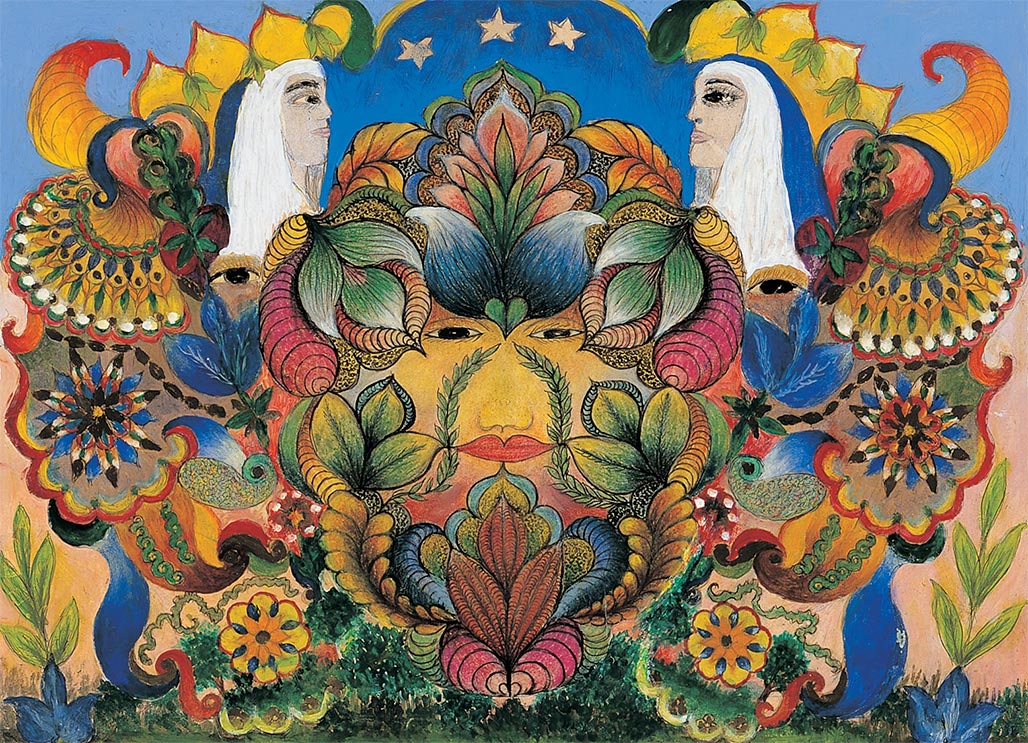 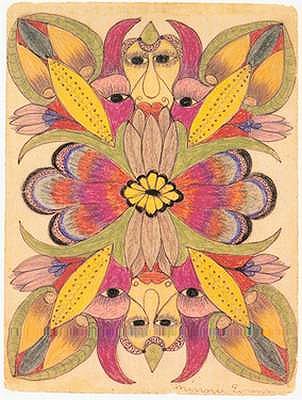 Pencil, colored pencil, and ink on board 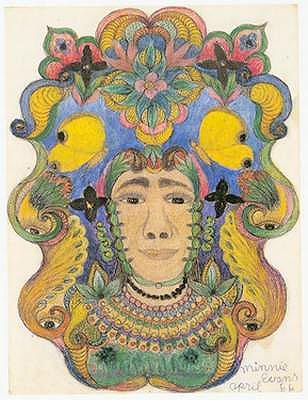 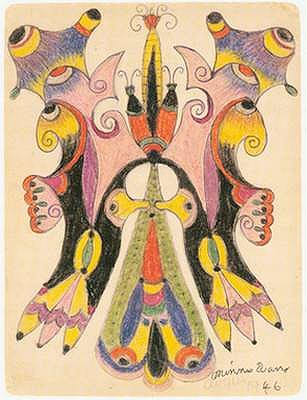 Pencil and crayon on paper 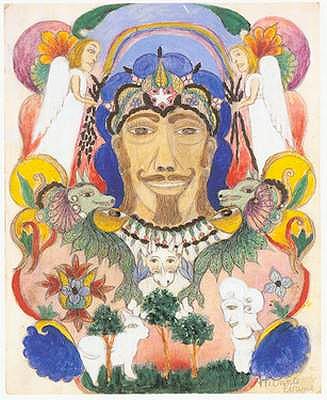 Oil and pencil on paper

Minnie began school at the age of five and attended until she was in the sixth grade, leaving school to help earn money for her family. She had loved studying history, mythology, and biblical stories which were part of her deep Baptist faith.

As a child, she often heard voices and had waking dreams and visions. She could not recall a night she slept without having dreams, and during the daytime, recurring hallucinatory experiences lead to a confused sense of reality. According to author Gylber Coker, “there were times when Evans could barely distinguish between dreams and visions, as well as between dreams and wakeful experience.”(1) This continued throughout her life, though the intensity of her visions varied. These waking dreams were often images of prophets and religious figures, real and mythical animals, flowers, plants and faces. She was quite conscious of this unusual aspect of her personality, and cautious about letting other people become aware of this phenomenon.

After leaving school, she worked as a “sounder”, going door-to-door selling shellfish gathered from the waters off of the North Carolina coast. She met Julius Ceasar Evans, and married her nineteen-year-old groom four days after her own sixteenth birthday. Not being of legal age, she wrote her age as eighteen on the marriage license, which became something the couple often joked about during their long marriage through which they bore three sons.

Her husband worked as the valet for Pembroke Jones, a wealthy landowner, and Minnie went into domestic service on the estate as well. After the death of Jones, his widow remarried and moved with her new husband to the estate called Airlie where the Evans’ continued working for the family. The 150 acres were developed into an expanse of gardens and opened to the public in 1949. Minnie Evans became the gatekeeper, collecting admission from visitors, and eventually retired from her post in 1974.

Evans didn’t start drawing until she was 43 years old, when a voice told her she must “draw or die”. On Good Friday, 1935, she did her first drawing, and the next day a second one followed. Both are now in the collection of the Whitney Museum of American Art. Her work was an automatic process, seemingly directed by outside forces. Evans stated: “I have no imagination. I never plan a drawing. They just happen.”(2)

It would be five years before she would create another picture. She found her two drawings, both dated and one bearing the inscription ‘my very first’ and the other ‘my second’, stuck in the pages of a magazine that she was about to dispose of by burning. This chance finding seemed fortuitous and signaled the beginning of her fervent art making.

As she began drawing compulsively, her family became concerned that she was losing her mind, but grew accustomed to her endeavors. She gave her pictures to people who admired her work, and eventually hung them up near the gatehouse at the gardens where she worked, selling them for fifty cents each, a sum equal to half her daily wages.

Eventually, Evans’ work came to the attention of Nina Howell Starr, a graduate photography student in her forties who was married to a professor of a Florida university. Starr worked with Evans from 1962 until 1984, becoming her de facto agent, traveling to see Minnie frequently and showing her work to New York galleries.

With the encouragement and assistance of her agent and friend, Evans work was widely exhibited. According to the exhibition catalogue Black Folk Artists: Minnie Evans and Bill Traylor from the African American Museum,

“The first Minnie Evans exhibitions were in the 1960s: 1961, Wilmington, North Carolina; and in 1966, New York. Evans came to New York on that occasion, and visited the Metropolitan Museum. This inspired her to enlarge the scale of her work, and to redo earlier pieces in a larger format.”

This is corroborated by Nathan Kernan in his essay, Aspects of Minnie Evans:

“After she returned home, influenced by the larger sizes of some of the works she had seen in the museum, Evans began to make larger works by cutting up existing drawings, gluing them to board or canvas-board, and expanding them with the addition of new paintings.”(3)

An Evans piece in the Petullo Collection bears the dates 1960, 1963, 1966, and shows seams where the board had been cut and a triangular center section inserted. Presumably, this is one of the paintings she reworked when experimenting with larger picture sizes.

Author Mary E. Lyons tells how Starr suggested that Minnie go back and sign and date earlier works, “Minnie agreed, though she had trouble estimating dates for pictures she had completed ten years earlier. As a result, many dates are incorrect. Not all of the signatures are Minnie’s either – in the early 60s, Minnie asked her granddaughter to sign her pictures for her.”(4)

A retrospective exhibition of her work was mounted in 1975 at the Whitney Museum. Evans was also honored when May 14, 1994 was declared “Minnie Evans Day” in Greenville, North Carolina.